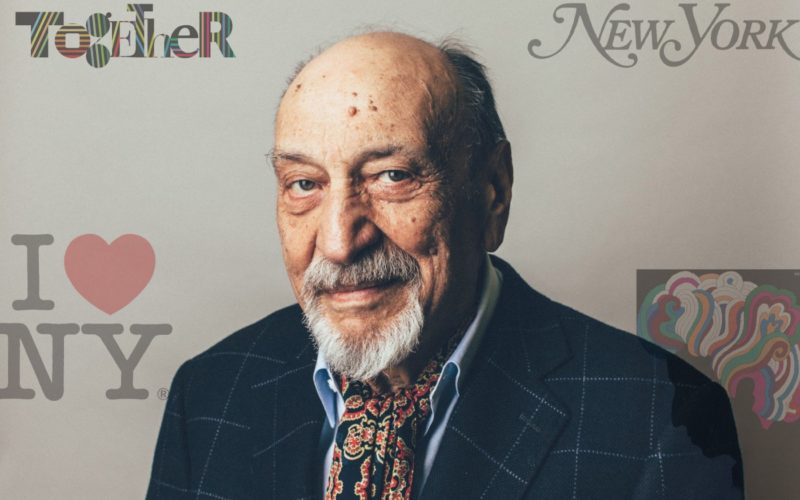 “There are three responses to a piece of design—yes, no, and WOW! Wow is the one to aim for.”

Recently, the legendary graphic designer Milton Glaser passed away on his 91st birthday. Today we want to recall some of his works and tell a little bit about him with his own quotes.

We think that here we have the right to say “enjoy!”) here!

For many, Milton Glaser is the epitome of American graphic design of at least the second half of the last century. His presence and influence on the profession is enormous. Unusually creative and expressive he was a modern man of the Renaissance – one of the rare representatives of intelligent designers-illustrators  who brought depth of understanding and conceptual thinking, combined with the diverse richness of the visual language, to his incredibly inventive and stylish work.

“I decided to be an artist when I was five years old. I made a conscious decision that making things was the thing that I wanted to spend my life doing. And it really was when I was five.

About Design and Art

“Well, I’ve been thinking about this for a very long time. Let me tell you a summary of what I’ve come to in my life. Art has a very specific purpose or else it wouldn’t have survived, and it’s purpose is the survival of the species. Art is the mechanism to help survival. So one might ask, so how does art help survival? The issue is that it makes you more attentive.

…the real purpose of art was to make us attentive so we could see what was in front of us and also to understand what was real, as opposed to the pre-conceptions we had about things. So art serves us by in a Buddhist sense, making you able to pay attention to what is in front of you, cause otherwise, you can’t seen anything or experience reality.”

If that’s my definition, then it suggests that you cannot tell art by virtue of medium, or function, or anything else except by the fact of its raising your consciousness to a degree that you are attentive. And so if something produces the state of attentiveness, whether it’s a drawing, or a guy making a cheese sandwich, we can call it art, at least by my description.

Art is functional because it has a purpose. But a day often transcends its purpose. If design makes you attentive, then it’s art. In the same way that if you look at a poster by Lautrec and a drawing by Lautrec, they both make you attentive, and so I would say, they are both art even though one would be easily categorized as design, and the other as art, because it’s done with oil paint on canvas. But you can see in the presence of both of them, that either can make you attentive and then we must say, either the poster or the drawing by Lautrec is a work of art.

Well, that was sort of a semi-joke, but not entirely. The thing about the computer is that it’s an extremely powerful instrument, and like all tools, it changes your perception of what is real, what is appropriate, what is pleasant, what is proportional. It has all these characteristics, in a same way that a pencil or watercolors or a crayon has, which is that they change the way you think about what you are doing. But the computer is so powerful and so dramatic in its effect on your perception of what is real and what is appropriate that you have to be very cautious that it doesn’t dominate your sensibilities. And what you see around you of work done by using a computer is the domination of the tool over the aesthetic or the judgment  of the user. So I think you have to be very strong about your consciousness of form, of color, of shape, and of meaning before you start using the computer or else, it will run all over you.

That’s the success of the “I ♥ NY” because you have to translate it from “I” which is a complete word to “heart” which is a symbol for feeling to “NY” which are initials for a place. You want to do a logo that’s a little bit more than decorative, although sometimes, that’s all you can do, something that looks good on the page, and one very often settles for that.

I have no such construct. I think my best work is the fact that I have been able to stay in it so long, and still be interested in doing it. That is an accomplishment. It’s so easy to get bored and to get indifferent to what you do, and the fact that you can still have the sense of enthusiasm and expectation about a day’s work is really my best accomplishment.

Oh, people always ask me that as it were answerable. The only advise I would give is that you have to have courage and the willingness to devote your life to it, and the enthusiasm to persist. Outside of that, there’s nothing!