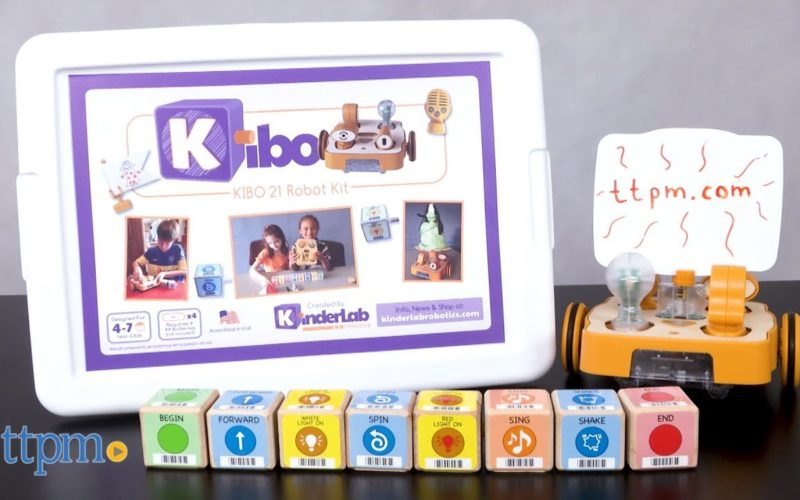 ?The company designed KIBO ROBOT KIT that can help teach younger kids to code with no screens required. Kids can program the robot by arranging a series of wooden programming blocks, all without ever touching an iPad. Sure, there are plenty of apps designed to teach coding to kids, but most of them involve iPads—and as any parent with little kids knows, the last thing they need is more iPad time.

? KIBO is the screen-free robot kit for kids that lets 4- to 7-year-olds create, design, decorate and bring their own robot to life! KIBO is an easy and fun way to bring robotics and coding to your young learners and spark their interest in STEAM (science, technology, engineering, arts and mathematics).

?Coding with the Kibo programming blocks is a simple process that a kid can pick up almost immediately. At first glance, the programming blocks look just like typical wooden building blocks, except these come with multicolored labels such as “forward,” “turn right,” “spin,” “backward,” and “shake.” Each wooden block they want, they’ll need to bracket her “program” with the “Begin” and “End” blocks, then take the two-wheeled, four AA battery-has a hole in one side and a peg on another, making it easy (and obvious) for kids to sequence the blocks in whatever way they see fit.

?Once your kid has their programming blocks arranged just the way powered Kibo unit (basically the main body of the robot) and scan the barcodes on the programming blocks using the built-in scanner.
Your kids can program the Kibo robot by arranging a series of programmable blocks and scanning their barcodes with the Kibo’s built-in scanner.
The scanner beeps and an indicator light flashes green if the robot scans a block correctly; if the indicator flashes red, something went wrong with the scan (such as a misalignment of the scanning beam or a bright reflection on the glossy barcode sticker) and your kid will need to try again.
When your child is finished scanning in their program, a triangular button on the main Kibo unit will flash green, indicating that the program has been successfully loaded. Press the button, and Kibo will run the program, moving forward, back, left, right, or backward according to the sequence of programming blocks.

?Of course, directions aren’t the only actions that can be programmed for the Kibo. A sound sensor that fits into one of the five sockets on the top side of the Kibo unit allows for a “wait for clap” programming block, while a “play” block triggers a microphone/speaker combo module to play back voice recordings.

Best of all (and by far the most popular option), the “free throw” arm (which can toss up to two ping ping balls at once) can be activated with the “throw” programming block.