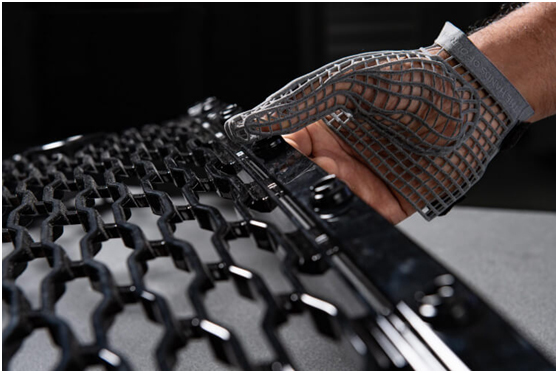 The first 3D printers appeared only a few decades ago.
Lately, however, the
advancement in 3D printing has been taking place
with a speed of a lightning and in many directions at once.
Initially, three-dimensional printing was
used in industry. With 3D printers it was much faster, cheaper and more
demonstrably to produce a component.
Today, 3D printers have become more affordable and easier to use. And, fortunately,
in addition to the entertainment function, they
also have a certain benefit.
For example, the invention of engineers
and designers at Jaguar Land Rover, who have designed and printed a 3D glove that protects
workers from workplace injuries. Occupational accidents are quite common. According to the
trade unions, from 7,000 to 12,000 people suffer from injuries at work every year!
Therefore, we believe that Jaguar workers are really lucky and this invention will be incredibly useful in production.
The special lattice structure not only protects from injuries and disorders of the
musculoskeletal system, but also supports the muscles without letting them get tired.
Workers have to wear such gloves during the 8-hour working day.
The company is going to release an advanced version of the foam glove made of the impact additive D3o. Its peculiarity is elasticity and impact
resistance at the same
time.